As it turns out, there’s more words to sexual vocab than “yes baby”, “harder”, and “please don’t put that up there”. Here’s some terms commonly used in the swinging/kink lifestyle – so you don’t have to find out the hard way 😉

bi-curious: a heterosexual who is interested in a sexual experience with someone of the same gender

bi-sexual: a person who is sexually attracted to all genders

dom: an abbreviated term for the word (dominator), someone who is the dominant person in a sexual context and/or relationship

double penetration (“DP”): when someone of the female sex has two penises in any bodily orifice at the same time (e.g. anus, vagina, mouth)

fetish: a sexual desire whereby someone is sexually gratified in an atypical way to a certain object, article of clothing, body part, etc. (e.g. panty fetish)

full swap: when a partner/couple is willing to engage in full sexual intercourse with another person or couple

kink: an unconventional sexual fantasy, fetish, or concept; derived from the idea of a “kink” in one’s sexual behaviour

pansexual: someone whose sexual attraction is not restricted by gender, biological sex, or gender choice

polyamory: the concept of having more than one romantic and/or sexual relationship at the same time

sub: an abbreviated word for the term “submissor”; the submissive person in a sexual context and/or relationship

soft swap: when a partner/couple is willing to engage in foreplay (e.g. oral sex) and sexual interactions with another person or couple except for full intercourse

the lifestyle: the modern day term for “swinging”

vanilla: term used for regular people who engage in monogamy and do not swing 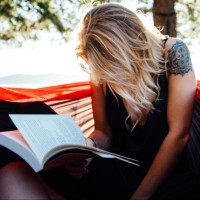 Layla
Layla is a 20-something swinger of 4+ years, intrigued by all topics of sexual exploration. When she's not blogging (or swinging!), she can be caught reading, looking up puppy videos on Youtube, or cooking in the nude.